When one thinks about data centers, words like dark, sterile, and “boxy” may spring to mind. Row upon row of non-personable machines humming along as they receive continuous data from the outside world. What if, however, an engineer literally thought outside the box for a more sustainable, hyper-efficient, and flexible solution? Perry Gliessman was that someone, and in 2014, he built a better center. 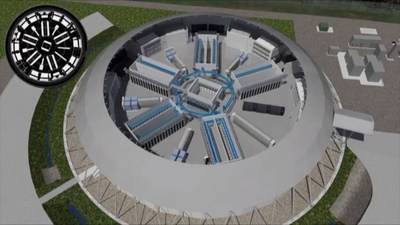 “My goal was to design a data center that would meet the challenges of a ‘technology revolution’ while promoting the reduction of the global carbon footprint and eliminating unnecessary infrastructure and associated resource consumption,” said Perry Gliessman, ServerDomes inventor. The ServerDomes design is the resulting data center ecosystem that meets those challenges via innovations in efficiency and sustainability.

By challenging the boundaries of industry standards, Gliessman created a data center sorely needed with today’s global climate crisis. For context, data centers worldwide used 500 Tera Watts of electricity in 2019 and approximately 350 million metric tons of CO2 were released into the atmosphere.

“5G, Artificial Intelligence (AI), and the Internet of Things (IoT) are no longer on the horizon – they’re already here,” said Ken Patchett, CEO, ServerDomes. “This is a critical time for our planet, and we need to make significant changes. ServerDomes unequivocally disrupts the status quo and solves the environmental and cost barriers to the increasing data center capacity needs.”

Sustainability without sacrificeOne big downfall of the data center industry is its voracious use of water for cooling. In fact, data centers worldwide use 900 billion liters or 2.3B gallons of water every year. However, the ServerDome shape and design enhance natural airflow, eliminating the need for ductwork, fans, chillers, air conditioners, and humidifiers. Outside air is drawn into the data center across a vegetative “bioswale” that encircles the dome to provide additional cooling and air filtration. The ServerDomes water usage effectiveness or WUE is a mere 0.14 L/kwh vs. the industry standard of 1.6 L/kwh.

The structure itself is recyclable, with no sheetrock or other typical, non-recyclable building materials.  It’s made of 60 percent recycled aluminum with a 25-plus year life span.

Cost-efficient, by designA ServerDome is less expensive to operate than the average data center – by up to 40 percent. The sustainable aluminum dome in the prototype has close to zero maintenance costs over a six-year period. And while most data centers require traditional air conditioning and cooling methods, ServerDomes does not, translating to lower utilities, maintenance, and labor costs. With annualized PUE of 1.13-1.17, the ServerDome is simply less expensive to operate.

Adaptable for climates, and climate changeThe exponential growth of severe weather and natural disasters is officially a reality. This was not lost on Gliessman during the design process. The entire ServerDome is constructed from non-combustible materials making them both fire and lighting resistant. Based on principles established by Buckminster Fuller, the geodesic dome is exceptionally stable during seismic events and unphased by winds of more than 100 miles-per-hour.

This past summer, another real element of climate change kicked in with full force. Wildfires lit up the west coast, creating the worst air quality in the world. Yet inside the ServerDome, the filtration system worked perfectly resulting in zero disruption. That is one of many examples of why ServerDomes is especially adaptable to different climates – even some as extreme as the polar arctic or the dry desert climate of Dubai.

ServerDomes is the next evolution of data center design; the future has landed.

I am a wife and dog mom to Jethro. I enjoy spending time with friends. I love to learn new things and supporting others.